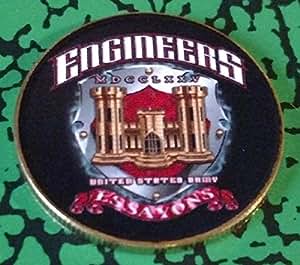 Here's to the flag flying up on the hill and the bird flying over our door. Stand by with your glasses, all brimming. Here's health and here's how and here's luck and here's to the castles of gold we wear and the eagle that looks like a duck.

The toast mentions the flag which is the American Flag flown at the Post Headquarters. The "bird flying over the door" and the "eagle that looks like a duck" refer to the relief carving of the crest taken from the seal of the Corps of Engineers.

Army Corps of Engineers "Essayons" - [March] Pin the castle on my collar I've done my training for the team You can call me an engineer soldier The warrior spirit has been my dream Chorus "Chorus" We are our brothers fighting on the battle field.

Look to us to point the way. We get there first and then take the risks to build the roads and air strips and bridge the mighty river streams. We don't care who gets the glory. We're sure of one thing, this we know, Somewhere out there an engineer soldier designed the plan for the whole darn show.

Essayons, whether in war or peace, We will bear our red and our white. Essayons, we serve America and the U. Army Corps of Engineers Essayons! We are builders, we are fighters.

We are destroyers just as well. There've been doubters who met with the sappers. We know our sappers will never fail. Alternate And then we blew them all straight to hell.

On the battlefields of ancient Mesopotamia, India, Egypt, Persia, Greece, and Rome, skilled Military Engineers laid the groundwork for the role of their modern descendants. During the middle ages of Europe, the French coined the term "genie" to represent the Engineers.

Over the years, "genie" evolved into the old English word "enginator" meaning one who operates the engines of war, such as siege towers, battering rams, catapults and the like.THE U.S. ARMY CORPS OF ENGINEERS BRANCH SONG "ESSAYONS" Essayons, sound out the battle cry Essayons, we'll win or we'll die Essayons, there's nothing we won't try. The Army prescribed new uniforms on February 18, , in General Orders 7, AGO, which officially described the button as follows: An eagle holding in his beak a scroll with the word, 'Essayons,' a bastion with embrasures in the distance, surrounded by water, and rising sun; the figures to .